Carnitas, literally meaning “little meats”, is a dish of Mexican cuisine that originated in the state of Michoacán. Carnitas are made by braising or simmering pork in oil or preferably lard until tender. The process takes three to four hours, and the result is very tender and juicy meat, which is then typically served with chopped coriander leaves (cilantro), diced onion, salsa, guacamole, tortillas, and refried beans (frijoles refritos).

Pork carnitas are traditionally made using the heavily marbled, rich boston butt or picnic ham cuts of pork. The 6–16 lb (3–7 kg) sections are usually cut down to a workable (6–10 lb) size and seasoned heavily before slow braising or deep frying.

The traditional way to cook carnitas is in a copper pot (or any thick-bottomed pot), which disperses the heat evenly in a process similar to confit. Lard is used to cover the dish in proportion to the amount of meat being cooked. Once the lard has melted, pork and flavorings are added (usually salt, chili, cumin, oregano or Mexican oregano, marjoram, thyme, bay leaf, and crushed garlic cloves). Traditional carnitas are then made by a process of simmering the meat in the lard until tender over a very low heat. Once appropriate tenderness is achieved, the heat is turned up and the outside of the pork begins to crisp. At this stage, the collagen in the meat has broken down sufficiently to allow it to be pulled apart by hand or fork or chopped with a cleaver. (WIKIPEDIA)

Having read that, you are probably thinking TOO MUCH WORK! Indeed, my spouse made carnitas the traditional way, complete with the copper pan we bought in Quiroga when we visited that area of Mexico. It took hours and was incredible BUT….too time consuming and messy!

One of my favorite Mexican TV cooks is Pati Jinich, who has a program on PBS and on YouTube (Pati’s Mexican Table). The following recipe is her version and done on the stovetop in a Dutch oven. It was PERFECT and a lot less onerous. 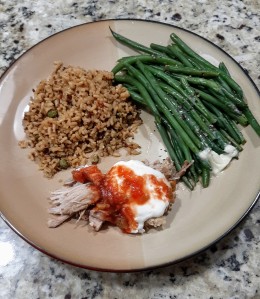 Heat the lard in a large Dutch oven or heavy casserole over medium-high heat. Season the meat with 2 teaspoons of the salt and the black pepper. Once the lard has melted, add the meat, brown on all sides, stirring and flipping as it does, for about 10 to 12 minutes.

In the jar of a blender, pour 1 ½ cups of the milk and add the garlic, onion and remaining 2 teaspoons of salt. Puree until smooth. Pour over the meat and let it come to a simmer, then reduce heat to medium-low, drop in the bay leaves, and cover. Cook covered for 1 hour and 15 minutes, flipping the chunks of meat a couple times in between.

In a small bowl, combine the remaining ½ cup milk with the sugar. Pour over the carnitas, stir, and let them continue to cook, uncovered, for another 4 to 5 minutes.

Turn off the heat.

With a slotted spoon, remove the meat and place in a bowl. Shred with a couple forks, add a couple tablespoons of the seasoned fat remaining in the casserole and toss.

This is normally eaten in  tacos with toppings like sour cream, guacamole, pico de gallo salsa, etc. As you can see we skipped the tacos/tortillas and simply plated it with some rice and green beans.