My dilemma…do I buy a full side salmon filet or just three pieces at the fish counter? With the full side from Costco, there are thick and thin pieces, some cook faster than others.

Resolution, trim off the thinner sides of the piece, along with the tail end. Cut these into cubes or smaller slices and freeze them in a bag to make other salmon dishes not requiring small filets. The result was this recipe which makes a very nice dinner when served with some freshly steamed brussel sprouts and maybe a nice rice dish. Those pieces can also be used in a pasta dish.

Slice the salmon into strips about an inch thick.

In a bowl combine the pepper, salt, five spice and cornstarch.

Add the salmon pieces and toss well making sure the salmon is well coated.

In a medium sized pan stick pan heat the oil until hot.

Gently place the salmon into the hot oil and cook for about 2 minutes. Turn the salmon pieces over and repeat with the other side until salmon is fully cooked.

Transfer the salmon to a paper towel to absorb any excess oil.

Serve with rice and garnish with chopped green onions and a sprinkle of red pepper flakes and a bit of sour cream if you like.

Carnitas, literally meaning “little meats”, is a dish of Mexican cuisine that originated in the state of Michoacán. Carnitas are made by braising or simmering pork in oil or preferably lard until tender. The process takes three to four hours, and the result is very tender and juicy meat, which is then typically served with chopped coriander leaves (cilantro), diced onion, salsa, guacamole, tortillas, and refried beans (frijoles refritos).

Pork carnitas are traditionally made using the heavily marbled, rich boston butt or picnic ham cuts of pork. The 6–16 lb (3–7 kg) sections are usually cut down to a workable (6–10 lb) size and seasoned heavily before slow braising or deep frying.

The traditional way to cook carnitas is in a copper pot (or any thick-bottomed pot), which disperses the heat evenly in a process similar to confit. Lard is used to cover the dish in proportion to the amount of meat being cooked. Once the lard has melted, pork and flavorings are added (usually salt, chili, cumin, oregano or Mexican oregano, marjoram, thyme, bay leaf, and crushed garlic cloves). Traditional carnitas are then made by a process of simmering the meat in the lard until tender over a very low heat. Once appropriate tenderness is achieved, the heat is turned up and the outside of the pork begins to crisp. At this stage, the collagen in the meat has broken down sufficiently to allow it to be pulled apart by hand or fork or chopped with a cleaver. (WIKIPEDIA)

Having read that, you are probably thinking TOO MUCH WORK! Indeed, my spouse made carnitas the traditional way, complete with the copper pan we bought in Quiroga when we visited that area of Mexico. It took hours and was incredible BUT….too time consuming and messy!

One of my favorite Mexican TV cooks is Pati Jinich, who has a program on PBS and on YouTube (Pati’s Mexican Table). The following recipe is her version and done on the stovetop in a Dutch oven. It was PERFECT and a lot less onerous.

Heat the lard in a large Dutch oven or heavy casserole over medium-high heat. Season the meat with 2 teaspoons of the salt and the black pepper. Once the lard has melted, add the meat, brown on all sides, stirring and flipping as it does, for about 10 to 12 minutes.

In the jar of a blender, pour 1 ½ cups of the milk and add the garlic, onion and remaining 2 teaspoons of salt. Puree until smooth. Pour over the meat and let it come to a simmer, then reduce heat to medium-low, drop in the bay leaves, and cover. Cook covered for 1 hour and 15 minutes, flipping the chunks of meat a couple times in between.

In a small bowl, combine the remaining ½ cup milk with the sugar. Pour over the carnitas, stir, and let them continue to cook, uncovered, for another 4 to 5 minutes.

Turn off the heat.

With a slotted spoon, remove the meat and place in a bowl. Shred with a couple forks, add a couple tablespoons of the seasoned fat remaining in the casserole and toss.

This is normally eaten in  tacos with toppings like sour cream, guacamole, pico de gallo salsa, etc. As you can see we skipped the tacos/tortillas and simply plated it with some rice and green beans.

Place a tomato slice on a plate and spread with some of the tapenade. Then place a slice of the goat cheese on top, add a few basil leaves, and finish with another tomato slice. You can add another layer to make Napoleon as high as you desire. Top with another small spoonful of the tapenade and then drizzle the Sweet Basil Dressing over the tomato and around the plate. Garnish with a sprig of fresh basil and repeat to make 4 to 6 plates. For a smaller version, use Roma tomatoes.

Tapenade (Honestly, I buy a small jar at the store…a whole lot easier)

Combine olives, garlic, anchovies and pine nuts in a food processor and process until smooth. With the motor running, slowly add the oil until emulsified. Season with salt and pepper, to taste.

Whisk together vinegar, Dijon mustard, and honey in a medium bowl. Slowly whisk in the olive oil until emulsified. Season with salt and pepper, to taste, and then stir in the basil.

Just in time for summer, maybe…LOL. This is not your traditional salmon salad. I prefer sockeye when I can get it, but you could use whatever you can find. It will last two days in the refrigerator. I am not a canned tuna fan but you could try it…

In a large mixing bowl, add carrots, bell peppers and capers. Mash salmon a bit with a fork inside the can and add to the salad.

Store: Refrigerate in an airtight container for up to 2 days.

*A few cups of coarsely shredded carrots would work. **Use any pickled goodies like asparagus, beans, olives etc.

Got the urge to BBQ already and realize that the BBQ is probably dirty from its last use, who knows when in this weather? Treat yourself to this recipe from The Spicy Apron (Pinterest).  While it calls for putting the steak on skewers, I modified it and used my frying pan.  With the blue cheese sauce, it was awesome! Throw a salad or bake a potato and you have a complete easy meal! Photo is from The Spicy Apron, since I forgot to take a photo when I made this.

Our Canadian friends who are “snowbirds” recently had us over for lunch overlooking the Gulf of Mexico. She served a wonderful cucumber and mango salad, not unlike this recipe. She and her husband love to experiment in the kitchen with whatever ingredients they have on hand. The cucumber and mango salad was wonderful!! We ate it all and this sent me looking through Pinterest for a similar recipe. Hope you will be able to give this one a try…

You are probably wondering why I am using summer squash now that it is Fall. Well, the truth is that northern type squash, which I love, are not normally available in Yucatan. What is “normal” are patty pan squash which are quite small but are available most of the year here. Recently I found a package of these so-called summer squash at a local grocery chain. So, here goes…

This recipe can be easily doubled, using 2 baking sheets and rotating the pans to allow for even cooking. And, yes, we eat the rinds, since there are lots of nutrients..

After finally getting together all of the ingredients to make MY OWN peameal bacon, I was ready to savour the flavour of a peameal bacon roast! For those not familiar with peameal bacon, it is an Eastern Canadian thing. A pork loin is brined for 5 days and rolled in a crust of cornmeal and placed in the refrigerator for a few days before slicing OR freezing for future use. If any of you are interested in the recipe for making your own peameal bacon, drop me a line. For now here is the roast recipe… 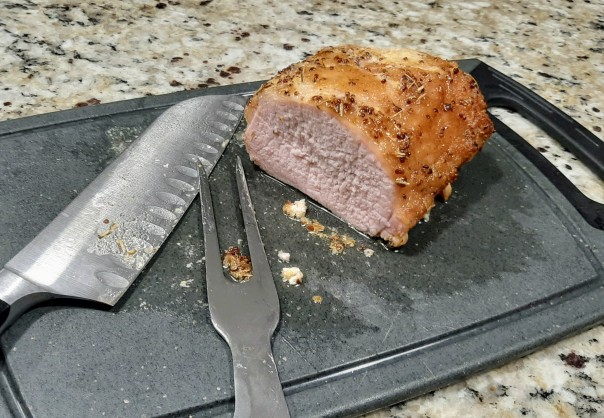 Makes a great dinner with some roasted vegetables of mashed potatoes and a side dish of green beans!

The salmon recipe was awesome, but I really did not enjoy the salsa. I will search out a different low carb one asap. Try it! You might like it…LOL. I have shown it here with the cauliflower rice. The salmon is buried underneath the salsa…sorry.

Instructions
1. In a small mixing bowl combine salt, cumin, paprika, onion powder, ancho chili powder and black pepper.
2. Rub the salmon fillets with the olive oil and rub with the spice mix.
3. Grill the salmon on medium heat for about 3-5 minutes or until desired doneness.
4. Mix the avocado, red onion, chopped cilantro, salt and juice from the limes in a small mixing bowl. Top the salmon with the avocado salsa.
Recipe by The Recipe Critic at https://therecipecritic.com/2014/07/grilled-salmon-avocado-salsa/

Think this is great for all of you vegans…right Jaromey?